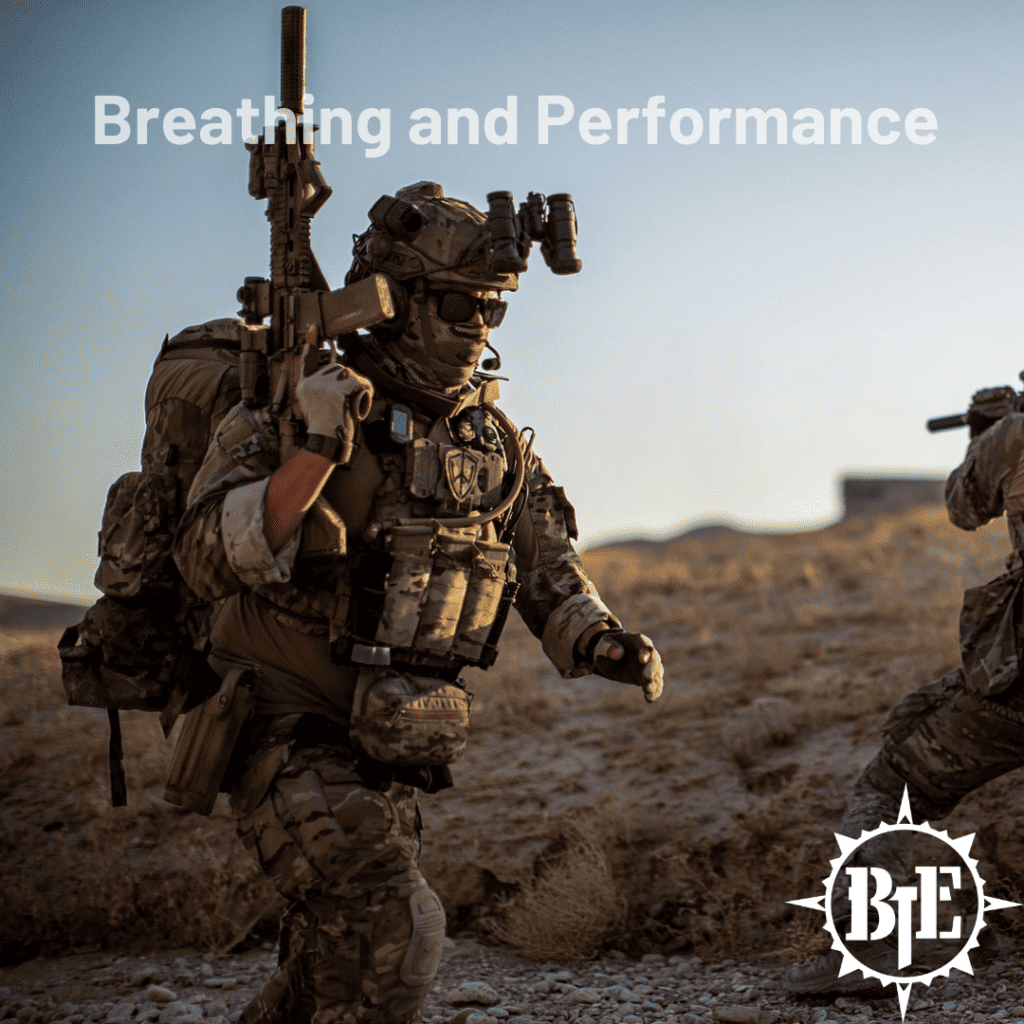 Breathing is an integral part of nearly every skill you’ll need in SOF selection from stress management to running, rucking and every physical task you’ll do.

And, just like how quickly you can run five miles or how much you can barbell back squat, how well you breathe is highly trainable.

Now, imagine if each time you take a breath you’re reinforcing a pattern that is limiting how well you move, recover, and feel on a daily basis. To assume (or hope) that your breathing patterns at rest, during exercise, and when stressed are good enough to pass selection is like hoping that you’re a good enough runner without timing a single run. Breathing is that important.

The ability to breathe properly is intimately tied to posture. The presence of proper breathing helps maintain posture and its absence propagates aberrant postural patterns. The rhythmic nature of good breathing helps maintain mobility and elasticity in joints. Breathing also has a major effect on soft tissue pliability throughout the body due to its direct effect on autonomic nervous system tone, circulation, and oxygenation of tissues.

Muscular structures that are related to breathing become ‘locked up’ when breathing patterns aren’t optimal. This creates a reciprocal cycle because when these muscles are overly tight they can restrict breathing. The constant contraction of these overactive muscles causes them to become ischemic. As a result, they don’t recycle waste products efficiently, further reinforcing the ischemic environment and muscle tightness.

This “tightness” also leads to slower recovery between training sessions due to reduced circulation. This results in less resilient tissue that cannot handle as much stress as healthy tissue, putting it at an increased risk of injury. Load that this musculature typically handles is transferred to other joints and muscles leading to more movement patterns compensations and excessive loading on joints.

All of this leads to ongoing patterns of compensation and compromised breathing. This is why posture and movement at rest is such a reliable indicator of breathing performance under stress. If you can’t breathe well you won’t move well.

Breathing and the stress response have a strong two-way effect on each other.

When your mind perceives a stressor your breathing pattern will immediately shift to fast and shallow exhales and deep inhales – this is called hyperventilation. This breathing pattern reduces systemic CO2 levels and increases relative O2 intake to prepare you for intense movement.

This happens when reduced CO2 levels caused by the change in respiration are not matched by an increase in O2 utilization by working muscle, which would normally drive an increase in CO2 production. This alters the rate at which oxygen can be offloaded into muscle cells, resulting in localized deficits in oxygen availability in muscles. This leads to a variety of negative effects:

Once hyperventilation begins, it can be difficult to escape. The human brain does not have a reliable method of escaping this feedback loop without conscious intervention and the changing of breathing patterns.

This is part of the reason that anxiety leads to more anxiety.

To escape this pattern, and more effectively control your stress response, use this specific breathing protocol:

Meditation and box breathing are two of the most popular ways to integrate this type of breathing as a daily practice. As we explored in depth in our book, meditation has other benefits in improving mindfulness and reflecting upon the tendencies of your mind (self awareness).

The respiratory system is the bridge between the cardiovascular and muscular system. If your heart can deliver blood efficiently and the local tissues can use all the oxygen delivered,  oftentimes the pulmonary (breathing) system will limit performance. This is especially true for more advanced trainees who have put in a significant amount of time with low-intensity endurance training that leads to local muscular and systemic cardiovascular adaptations.

Every time you take a full inhale and exhale the pressure gradient within the venous system in the thorax around the heart alternates. The pressure change that drives expansion of the lungs during inhalation also causes expansion in the right atrium and ventricle of the heart, as well as the inferior and superior vena cava, which helps to drive venous refill, increase stroke volume and helps to bring deoxygenated blood back to the lungs.

During exhalation, the shifting pressure gradient helps to move oxygenated blood from the lungs to the left ventricle, which refills during each relaxation phase in the heartbeat. If you can’t fully inhale and exhale, this will lead to poor eccentric filling, lower stroke volume and decreased cardiac output.

This is a big deal. If you can’t breathe effectively when exercising, your heart has to work harder to do its job, and your aerobic fitness will suffer.

When cardiac output (the volume of blood pumped by your heart) drops due to poor breathing mechanics, your heart has to beat faster. This leads to less time between beats (less rest) and a stronger contraction at each beat to try to move less blood faster. Both of these factors contribute to cardiac and systemic fatigue over time.

In longer duration, steady-state work this often presents as cardiac drift, where heart rate slowly creeps up despite no increase in output. The heart is picking up the slack of the respiratory system.

During higher intensity work, if the respiratory system is lagging, the heart is also less capable of creating enough force to effectively drive blood through working muscles. When a muscle contracts, it creates tension. This tension creates a compressive force on both arterial (oxygenated) and venous (non-oxygenated) blood vessels. When the heart has a reduced cardiac output due to poor breathing mechanics (and reduced eccentric filling) and eventually an elevated heart rate, it’s less capable of consistently producing enough pressure to drive blood through the tissue.

The slower blood flows through tissue the longer the transit time and the lower cardiac output becomes as blood pools in working tissues. This is what happens when you start to feel ‘pumped’ despite doing relatively low-intensity work.

In summary, the stress placed on the cardiovascular and muscular system can be greatly impacted by your breathing mechanics. This is why breathing is oftentimes not the perceived limiting factor, even when it’s the weak link in the system.

Overview of Breathing and Fitness:

When lifting heavy or unstable objects, proper stabilization of the spine is dependent upon the proper synchronization of deep core musculature that is initiated by proper breathing. In other words, if you don’t breathe properly you can’t stabilize your spine effectively. This can lead to spinal injuries or other maladies or downstream issues caused by overworked and poorly- positioned muscles and joints.

How we coach breathing and bracing:

Proper bracing also allows for continued breathing. This helps tissues distribute load and not cut off blood flow during work.

The flow of blood to tissues is determined by the radius of a vessel to the 4th power. A 10% reduction in diameter cuts the volume of blood carried through a muscle in half. So, a slightly overactive muscle group can reduce its potential work by 50%. This is especially important for repeated efforts like distance carries, rucking, and PT tests.

How We Integrate Breathing into the Training Process

Position dictates function. If breathing musculature is in a poor position to function, it can’t improve fitness. Movement corrective work combined with strength work to reinforce new positioning should be the first target when training breathing. This also allows the athlete to learn the coordination of ideal breathing mechanics under low or no stress conditions.

Movement interventions should be specific to the individual, but we also use general movement circuits to help maintain movement variability once it has been established. Below is an example:

Once movement has been improved, coordination of breathing mechanics in various activities should be targeted.

Below you’ll find brief overviews of breathing in each of the movement categories below (click on each for a video overview):

Breathing drills and coordination should first be taught under low intensity and fatigue. Once the athlete displays control over their breathing in lower intensity work you can slowly increase duration and intensity (adding more stress).

Coordinating breathing and movement helps athletes learn how to alternate bracing and movement to help maintain variability in their movement. For example, we’ll add things like reciprocal motion to lunge and press variations to facilitate motion in some areas while creating stability in others.

On the conditioning side of things, doing fartlek type work during long-duration steady-state aerobic training is a great way to stimulate more conscious control over breathing. The intermittent, short duration, high-intensity sprints help stimulate the breathing drive for these athletes and reinforce ideal breathing patterns between sprints.

Reverse splits during interval training are a very handy tool to use when training a breathing limited athlete. By starting off ‘too fast’ and slowly reducing output, you initiate the breathing drive right away. This helps the athlete settle into an ideal breathing frequency and depth later in the working set. For example:

In the example above, the average intensity is the same as doing six minutes at threshold pace. However, by starting fast, CO2 accumulates faster and your breathing drive will kick in faster than would have happened with a steady output over the interval. By stressing the limiter, you can train the system limiting performance while maintaining a similar adaptation response to the rest of the body.

General movements like breathing during low intensity running, light rucking, planks, and light overhead work should be taught first. As the athlete masters breathing in these positions you can move to more and more specific scenarios. For example:

Quality should always be respected, and as soon as the athlete breaks down past the point of benefit (poor movement / compromised breathing) the exercises should end. Over time you’ll be able to add duration, intensity and ambiguity to these workouts.

Breathing is an integral part of every element of the training process. If you’re looking for more information on this topic, our book (Building the Elite) covers this topic and much more.

1 thought on “Breathing and Performance”