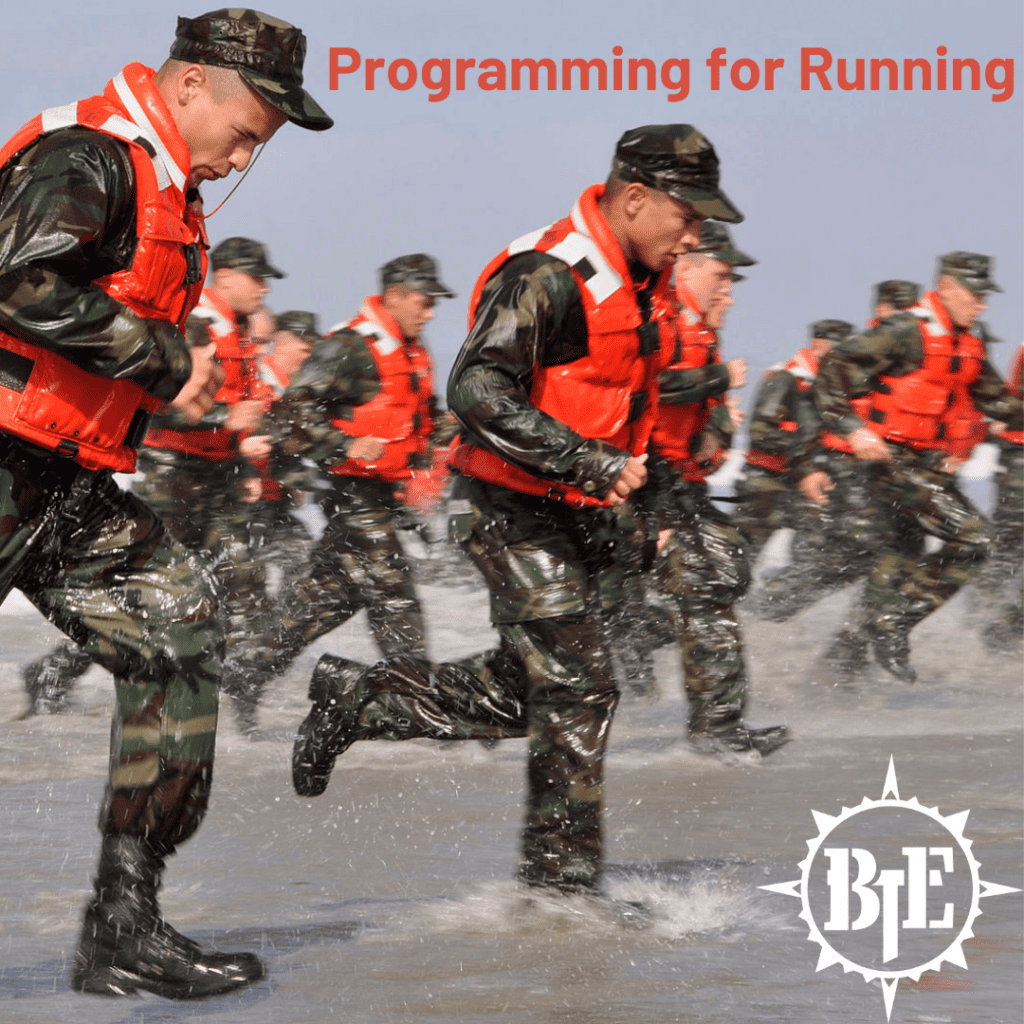 If you’re missing either, you won’t be able to run a fast time on your PT test. The deeper into your selection course you go or the longer you have to run, the more weakness in either will be exposed.

Unless you are a highly skilled runner who has built a strong foundation of running fitness over multiple years, your running efficiency likely isn’t high enough to develop aerobic fitness via running.

In other words, running reveals your fitness more than it develops it. Until you’ve reached a certain threshold in your development, it’s more effective to train for running than it is to run as a form of training.

That’s not to say that you can’t improve your fitness via running – you certainly can. However, running is best thought of as a way of enhancing the output of an existing aerobic foundation, not building one.

In most selection courses, you have about one or two timed runs per week, at most. And, the required run times are equivalent to a mediocre pace for a high school cross country runner. In other words, the standards aren’t high relative to what a dedicated runner can do in isolation.

It’s not running a 9-minute 1.5-mile run that’s terribly hard, it’s doing it in the context of a SOF selection course alongside countless other demands. This is where the challenge lies in training for selection.

For this reason, when programming running, we use pacing instead of heart rate zones to dictate training intensity. When programming, we think of running as a distinct skill to develop outside of our energy system work.

Preventable soft tissue injuries are one of the primary reasons for failure in special operations selection courses. So, efficient running is as important as fast running. This requires a high level of motor skill.

Outside of timed runs, you’ll spend a lot of time on your feet in selection running from event to event, to the chow hall, to the barracks, and everywhere else. You need to be efficient to cover all that ground without breaking down.

We place as much emphasis on technique as speed, knowing that the two will go hand-in-hand over time. It’s important to note that when changing your running technique you’ll often see an initial drop in performance (this is an opportunity to apply the concept of investing in loss). This occurs because you are loading tissues in new ways and building new motor patterns, and your fitness will take some time to catch up. When it does, your run times will speed up and your aches and pains will decrease.

In summary, efficient running is fast and safe running.

In normal circumstances, we program 2-3 running workouts per week depending on the training phase, selection course, and individual’s fitness level.

Running methods are broken into three categories: foundation, speed, and support work. Both foundation and speed will always be present in your program.

Support work is the bridge between foundation and speed work and is utilized once a foundation has been established to help translate the foundation you’ve built into faster run times.

Before we discuss these methods you need to do an assessment to use as a baseline to determine running pacing for each method.

If you’ve been running consistently and can easily run for 30 minutes, you’ll do the following test.

We have athletes perform the following test on a day when they are well-rested:

At the end of this test you should have your average pace over the 30 minute trial (time per mile). This is your threshold pace.

You’ll use this pace to assign running paces for all the methods described below.

The most common mistake that most trainees make with their running is always running as fast as possible on each run. This can work well for a while to build fitness if you haven’t been running. But, you’ll often plateau quickly without other developmental work.

Foundation runs can be broken up as much as is needed to protect quality during initial training blocks. If you find running technique, breathing patterns, or your heart rate gets out of control during distance runs, it’s ok to add in short rests throughout the workout until you’ve reached the prescribed volume.

For example, you’re better off doing 6 reps of 5-minute blocks with a one minute rest between sets than grinding through 30 minutes with poor technique. Over time you’ll be able to lengthen these blocks while maintaining quality.

You need to be careful when adding volume to your long runs. Stick to around a 10-20% increase per week until you are up the longest run you’ll need to do in selection (usually 5 miles).

If you have taken a long break from running, start with 10-15 minutes total on your long run (broken up as needed) and build from there. That may seem like a small start, but you’ll be able to make progress much faster by incrementally building on success.

Once you can easily do your distance runs without stopping, adding in surges (also known as fartleks) will help add speed to your runs and get you used to dealing with more variable terrain. These runs also help teach you how to modulate your stress response when forced to mix in periodic ‘sprints’ during long and non-stop activity. Physiologically, these sprints target fast-twitch muscles that aren’t normally used at slower speeds or until deep fatigue sets in.

Pickups, where you finish the long run at a faster pace, can also be added in after distance runs can easily be executed. These are a great way to develop mental skills by pushing yourself to finish strong despite exhaustion. They also help build confidence that you have a deep reservoir of fitness available, even when fatigued.

Sprints, or speed work, are an important part of your running programming. They serve multiple purposes:

Sprints can be included in every phase of training, from building an aerobic foundation to peaking for selection. In later blocks, where you might have a threshold and repeat run day in your training process, you can integrate sprints into your distance runs or as part of repeat days.

Support or pacing work is the bridge between long-distance and speed work. To bridge the gap effectively requires a relatively well developed aerobic foundation. If you can already hit your long run times (3-5 mile run) or are close (within 30s / mile) to the desired pace, the repeat method described below can be implemented immediately.

If you haven’t been running those distances consistently or can’t stay within 30s / mile of your required pacing, you should stick with two foundation runs per week until reaching the required pacing with your long runs.

Repeats are an extremely effective method of slowly working up to your desired 1.5-2 mile time through slow increases in the distance of each repeat at a set pace. For example, you’ll want to start with mostly 400m repeats at your desired pace and slowly work up to 800m repeats at the same pace.

Once you can complete a full workout of 800m repeats you can start adding in threshold runs. This will be the final step to reaching your desired 1.5-2 mile run times. If you find your pacing on threshold runs feels easy, you can slowly increase pacing (faster than threshold). This is common when running consistently with an intelligent plan for the first time.

Running is just one of the many capabilities you must possess if you want to pass your SOF selection. In our book, Building the Elite, we cover this topic in more depth, and how to fit running into the larger process of preparation for a selection.

11 thoughts on “Programming for Running”