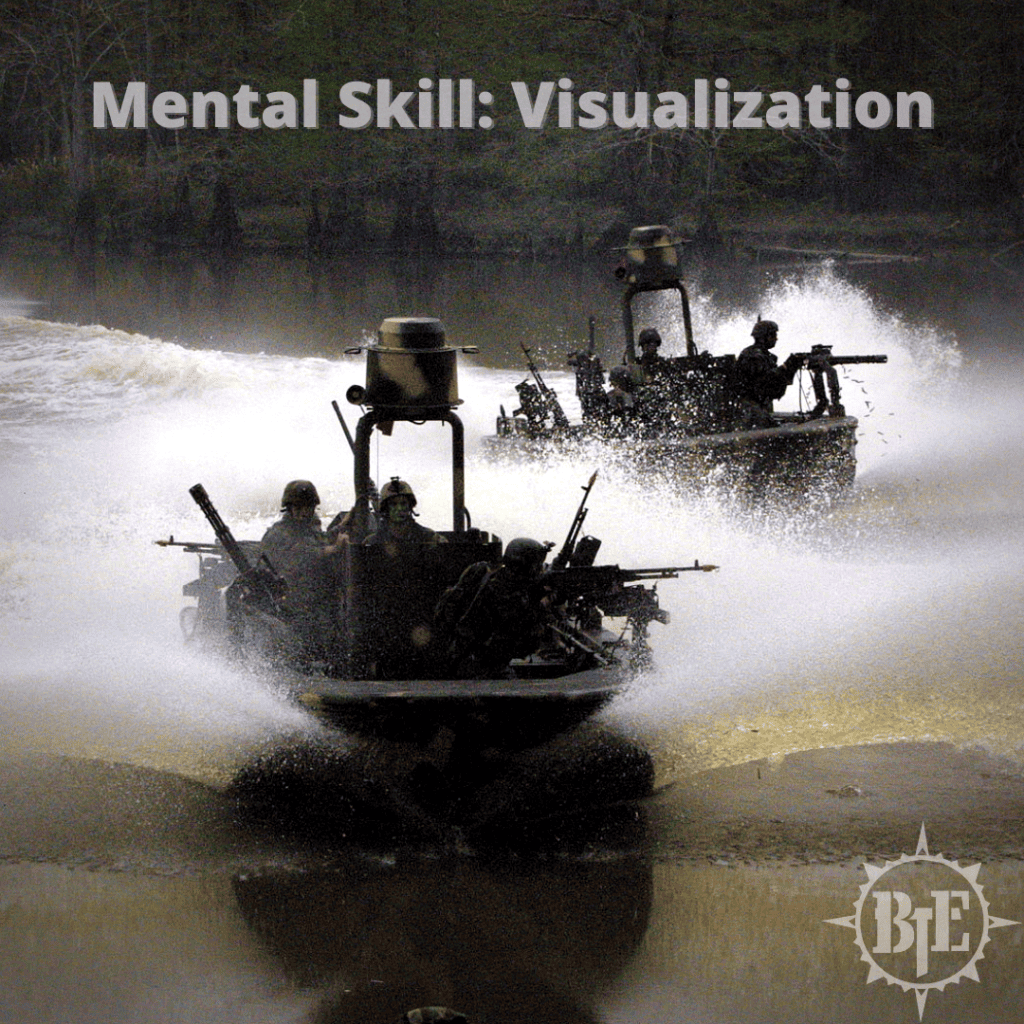 Visualization, like segmenting, is exactly what it sounds like – the practice of mentally rehearsing something before you do it.

Researchers use the acronym PETTLEP to break down the components of a visualization exercise that should be accounted for: Physical, Environment, Task, Timing, Learning, Emotion and Perspective [1,2].

Skills are contextual. When you’re practicing something like shooting a pistol or controlling your self-talk during the most intense portion of a run, that skill is going to be nested within the entire picture of the setting in which you’re learning it.

Shooting a pistol is associated with how the pistol physically feels in your hand, the smell of the oil and gunpowder, the weight of the kit you’re wearing and the environment of the range that you’re training on. The running skill is folded into the terrain that you’re on, the clothes you’re wearing, the people you’re with (or not), how you think about the workout and the way your body feels under fatigue among many other factors.

When you’re practicing a skill via visualization, the more contextual details you can incorporate, the more effective your training will be.

While I was in the Brownshirt program, I had a friend from BUD/S who had been rolled out of dive phase after failing a test called pool comp. Pool comp is one of the most difficult “evolutions” in BUD/S. The student swims along wearing a dive rig and is accosted by an instructor who rips his mask off, pulls his respirator out, ties the tubes of his dive tanks into knots and then leaves him to figure things out on the bottom of the pool while holding what’s left of his breath.

There are numerous checkpoints throughout this process, and missing any one of them results in failure.

For weeks before he classed back up to re-enter 2nd phase, we would meet in his room where I’d watch him mentally rehearse and act out the motions of the pool comp test. SWCCs don’t have a dive phase in their training, but he taught me the test criteria and explained every nuance of detail that an instructor would catch if he made a mistake. My job was to play the role of Instructor Hardass.

My friend would close his eyes and mentally put himself back at the pool. He’d stand on the edge, step into the water, and swim along waiting for the instructor to slam him. I’d sometimes throw cold water at him or roughly yank a dive mask off his face to get things moving. From there, the first step in the test is to kneel on the bottom of the pool, as a way of indicating comfort with being at depth. While kneeling on the floor and holding his breath with empty lungs, he’d reach for his imaginary dive tanks, pull them over his head, situate them in front of himself and work through the tangled hoses.

We drilled that countless times each day in the weeks coming up to his re-entry into second phase, and in the days prior to his actual test. By the time he re-tested, he’d done the procedure at least a hundred times in his head. He passed the test smoothly and graduated the course several months later.

Visualization is another way of improving your sense of predictability and control in a future environment, in the same way that training methods like open-ended workouts or nutrient periodization can familiarize you with specific physical demands of selection.

Your perceptions of predictability and control in a stressful situation are the main levers you have for modulating your stress response: Whether the event is experienced as a challenge or a threat, the nature of your endocrine response, your cognitive function and adaptability and your level of available motor skill are all shaped here.

It’s a form of skill practice, and if you’re good at it, you can accurately recreate your real-world performance environment in your mind. It’s not just for motor skills, but can also be used to rehearse other mental skills like those described in this series, in a safe, lower-stress environment.

For example, our last article talked about segmenting. As you work to incorporate segmenting into your physical training, you can use visualization to help establish the process. Prior to the actual event, you can mentally walk yourself through exactly when and how you’ll apply segmenting so that when the time comes you’re in somewhat familiar territory, navigating by established mental landmarks.

This also applies to high-stress skills outside of the traditional SOF environment. Operators in the intelligence community, as well as executives in the corporate world, often find themselves in situations like high-stakes pitch meetings, presentations, or clandestine encounters in which the physical demand is low but mental and emotional stress are intense. Just like a pool comp test, your chances of success are much higher if you can take preparatory steps to give your mind a “been there, done that” stress response during the actual event.

Of course, the carryover from visualization isn’t 100%, and you can easily visualize yourself doing something impossible. But it is a good way to gain experience on tasks that are difficult to practice in the real world. You could think of it as a stage in stress inoculation-based skill development. If you can’t do it smoothly and calmly in your head, then there’s almost no way you’ll do it well in reality.