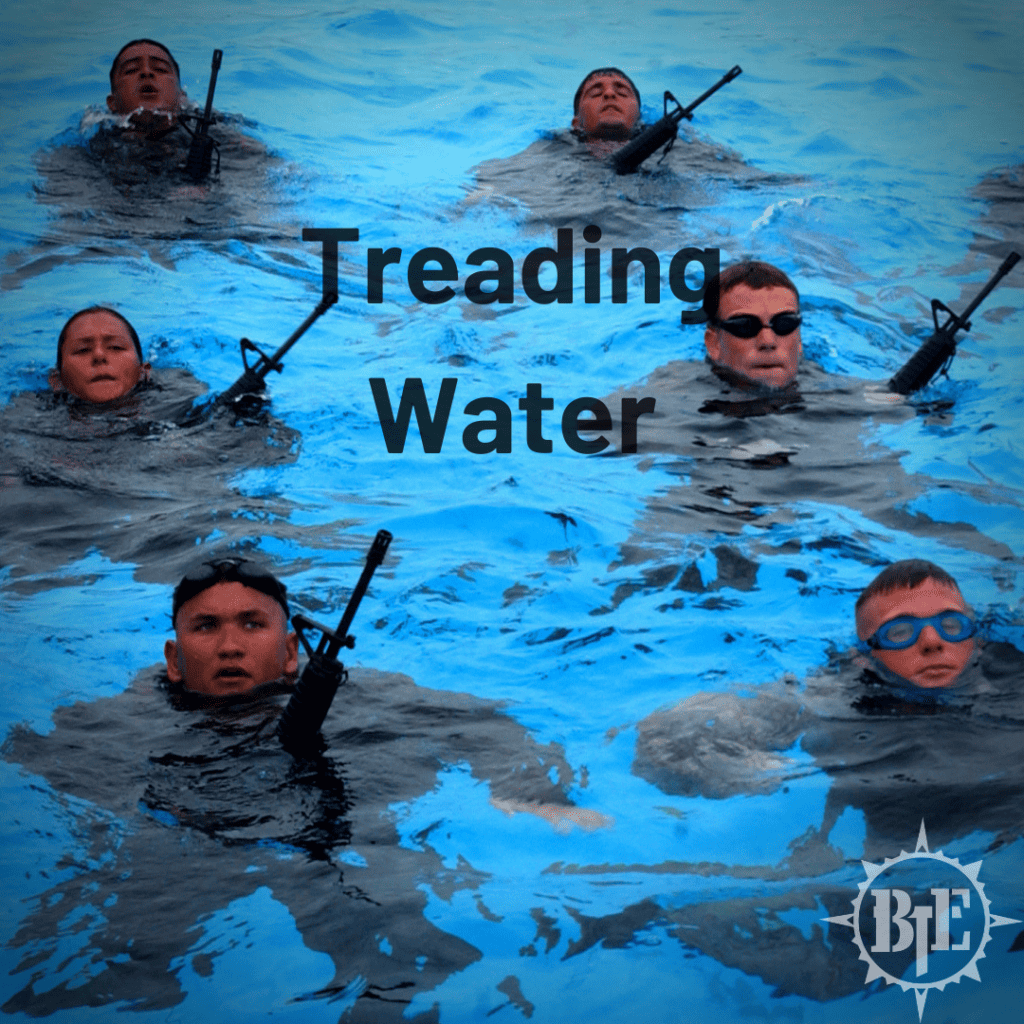 Being comfortable in the water is a generalized skill, but being able to tread water efficiently is very specific. There’s a right way and a wrong way.

Treading with fins is straightforward and doesn’t require much discussion. It’s more about physical endurance than technique, as long as you have the basics of finning down and are moving more from your hips than your knees.

Treading with boots or bare feet, however, is an art form. One of the most important things to keep in mind about this is that you get much more propulsion off the sides of your feet than you do the tops and bottoms. Bare feet don’t make great fins.

This is why athletes like water polo players master the “eggbeater” treading technique, which fixates your hips and knees in flexion, as if you were sitting in an invisible chair, and uses rotational power from your hips. This way, you’re using as much of the lateral surface of your feet and legs as possible to generate propulsion. Another way to think of the eggbeater is that it’s almost the same kicking motion as used in a breaststroke, but alternating from one side to the other instead of with both legs at once.

An easier version of the eggbeater to start with is the modified breaststroke kick. This is the same motion as the eggbeater, but with both legs moving in unison rather than alternating. This is easier to learn, however, it has the drawback of increased vertical oscillation – moving both legs at once means you’re more likely to bob up and down, waste energy, and dip your face in and out of the water with each stroke.

You can think of the modified breaststroke kick as having two phases: propulsion and recovery. Propulsion is where you’re generating power and keeping yourself above water. Recovery is where you pull your extended legs back up so that your feet are tucked under your butt and ready to move into the next stroke.

Within those phases, each stroke has 3 basic positions that merge together into a fluid movement:

Upward flexed. Here, you’re flexing your feet (toes pulled toward knees) and pulling your feet tightly under your hips by flexing at the knees and hips.

Outward flexed. In this position, you’re internally rotating your hips in order to turn your feet outward and create a large surface area using your shins and the sides of your feet to push water from the top of the stroke downward. The more you can internally rotate your hips and spread your feet apart from one another during this phase, the more power you’ll be able to generate with each stroke. 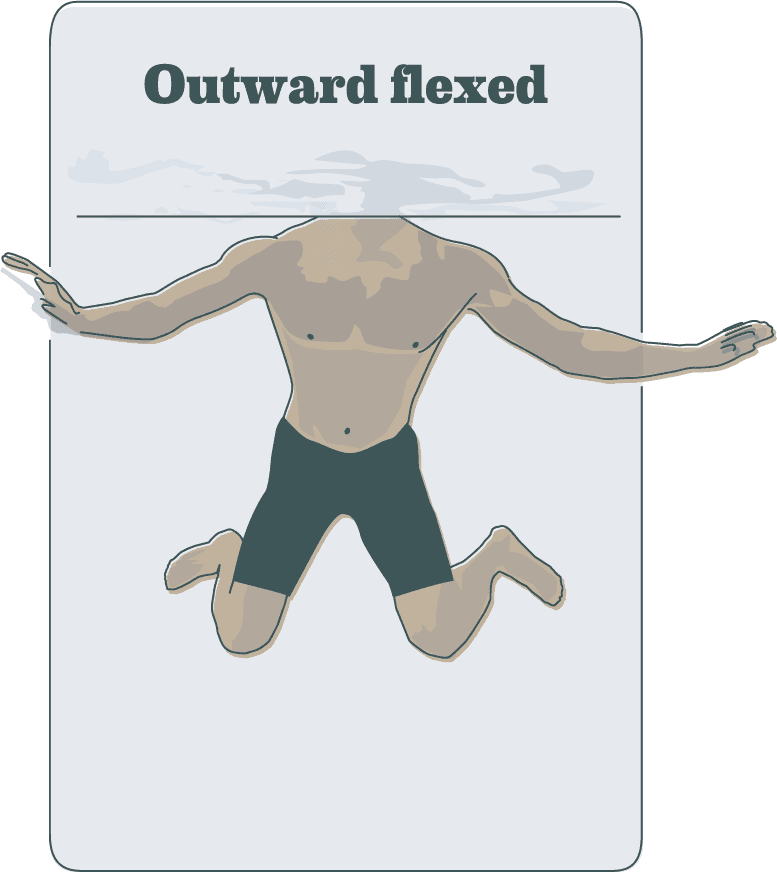 Around to point. Here, you’re moving your feet out and around in an arc toward your centerline, finishing with your toes pointed downward. Importantly, you want to keep your ankles flexed, with your feet pulled upward, until the very bottom of the movement. Once you’re at the bottom, you’ll point your toes and start pulling straight back up into the upward flexed position. 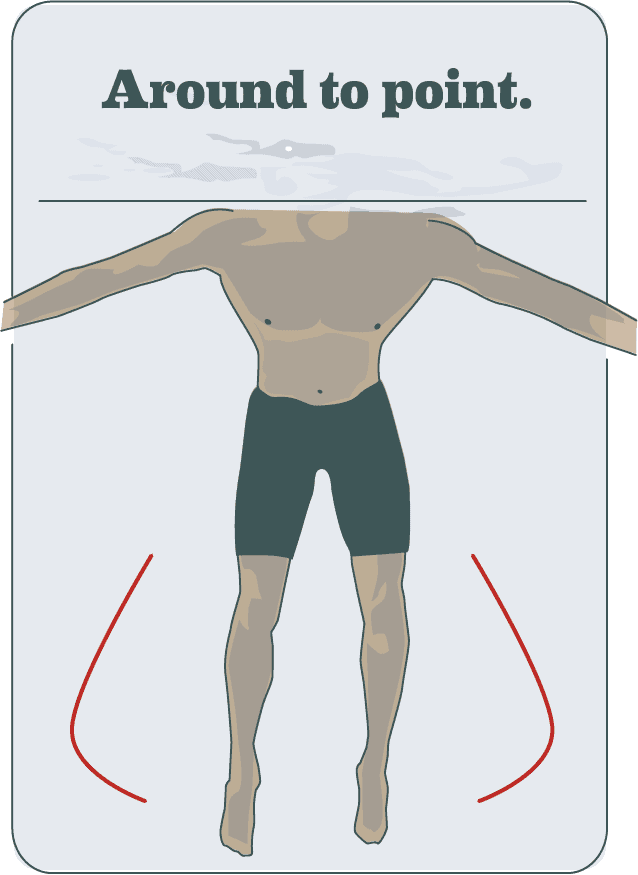 Throughout the full stroke, keep your knees no more than shoulder-width apart. Your power comes more from the rotation of your hips than from lateral movement, like spreading your legs apart and bringing them back together. Having good rotational movement allows you to keep your feet perpendicular to your direction of force, which creates the most propulsion.

A good way to practice the first two positions of this stroke is on dry land, sitting in a chair. You’ll need a chair with four legs that’s open underneath so that you can move your feet under it.

Upward flexed. Start in the chair with your feet on the ground in front of you and your knees shoulder-width apart. From here, pull your heels underneath the chair, toward your butt. This puts you in the top of the upward flexed position. 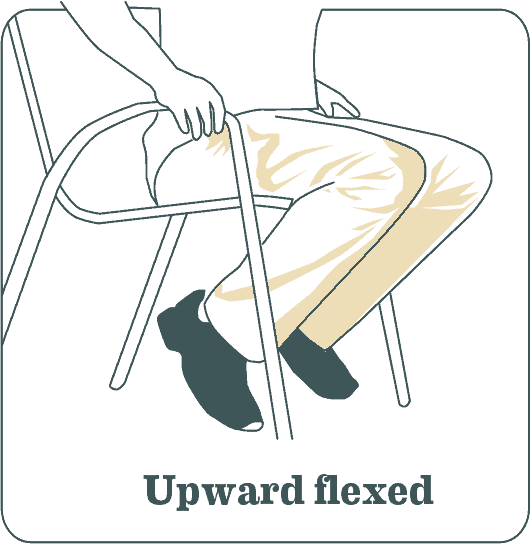 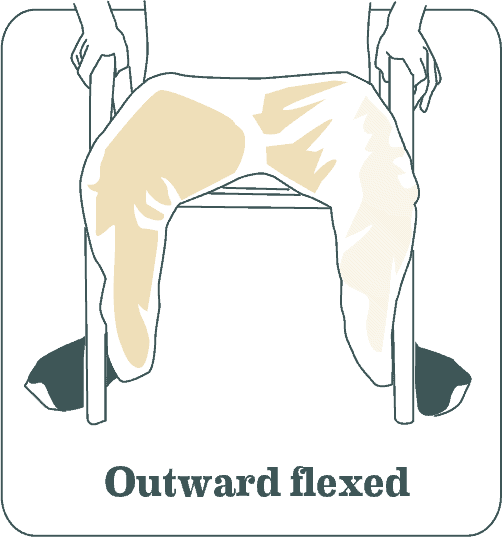 Around to point. Once the first two positions feel comfortable, a version of the chair drill can also be used to integrate the final portion of the movement and work on the alternating eggbeater rhythm. It’s helpful to practice this movement on land for a while because it can be awkward when you first start practicing it in the water.

For this, you need to straighten your hips during the around to point phase, so it’s best to lean back in the chair and do the first two positions with your legs held out in front of you, rather than putting them under your chair. You’ll move through the upward and outward flexed position, and then with one leg, move to the bottom of the around to point position, ending with your leg straight and toes pointed.

From here, alternate legs by pulling your extended leg back into the upward flexed position while simultaneously reaching your other leg out and down to the around point position. 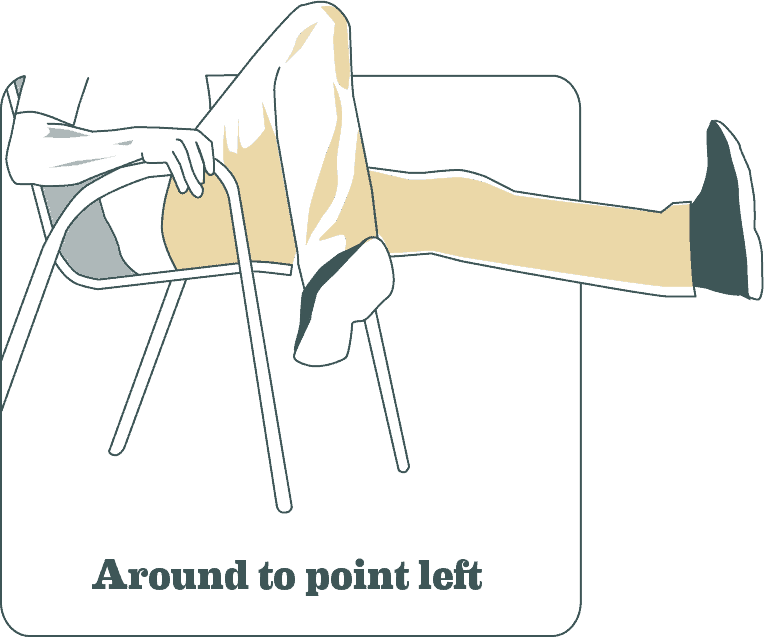 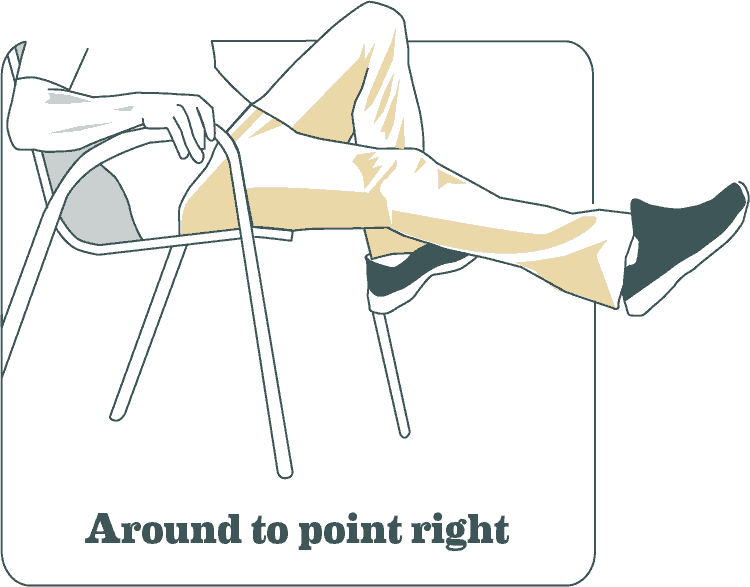 This drill allows you to practice the full-range sequence, and get used to the alternating rhythm of the eggbeater tread. You can also practice it by holding onto the side of a pool, or by suspending yourself in the water by holding a floatation device.

Treading water is only a test of fitness if you’re bad at treading water. Learn the skill. These little pictures will give you a rough idea of what to do, but the internet is also crawling with detailed tutorial videos that can help even more. If you’re still struggling, there is a lot of value in doing some in-person work with a good coach who can give you real-time feedback.