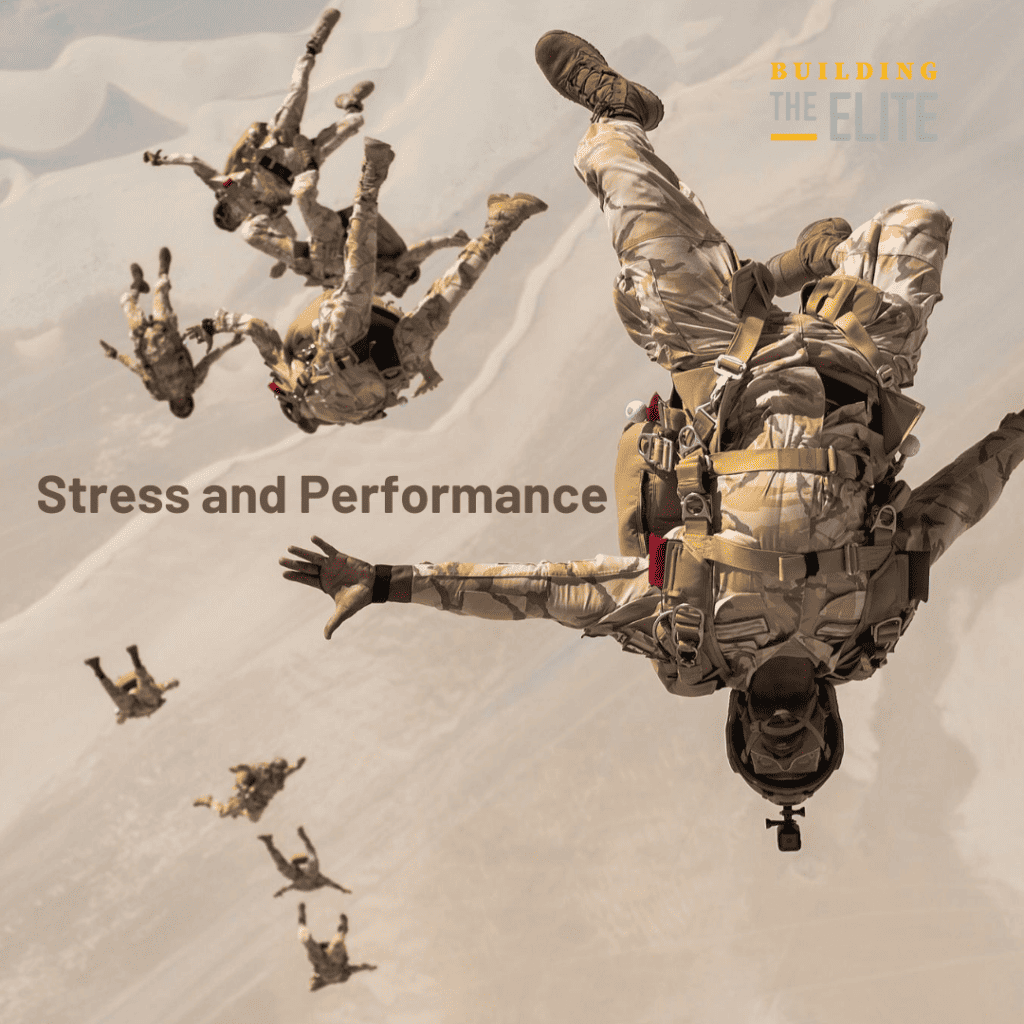 When designing exercise programs there is generally an inverse relationship between intensity and complexity. As training intensity goes up, the complexity level of the exercise that you can effectively perform goes down.

By understanding how complexity and stress interact, you’ll be able to choose the right movements for the right goal in your programs, get the most out your workouts, and build training progressions that enable you to execute a greater range of skills under a wider range of difficult conditions.

Performance of any skill falls on a bell curve of arousal. Too sleepy or slow and you can’t concentrate or learn. Too stressful and fast and you fumble, make gross errors and fail. Get it just right and you’re in the “zone of optimal arousal.” You’re right at the edge of your ability, perfectly focused and meeting the challenge. This is known as the Yerkes-Dodson law.

If you’re doing something highly complex, like reassembling tiny parts of a weapon or putting in your contact lenses, you’ll do best with a heart rate that’s above resting, but nowhere near stressed out. You’re calm and focused. This is thinky-brain territory. It’s roughly where you’ll be when cognitively learning a very new, complex exercise or sports movement.

Towards the middle of that spectrum is most gym exercise. Your heart rate is up, your strength levels are high and you’re still able to think clearly and make subtle adjustments to what you’re doing.

On the far right of the curve is where highly intense workouts land us. You’re physiologically maxed out and your complex motor skills are mostly inaccessible. Instead, you’re in the optimal zone for very high levels of force in simple, primal patterns like grasping, pulling, pushing and sprinting. These are the movements that move large groups of muscles through a big range of motion under high force and produce the massive metabolic impacts that we’re often after.

In high intensity, low complexity training sessions, you’re looking for exercises that you can do “with your brain turned off.” You want things that can be done at an all-out level of intensity, that train the movement pattern or muscle groups that you’re after, and that require the lowest possible level of technical skill.

The idea is that they can be done with good movement quality and low risk of technical breakdown or errors with the conscious, cognitive mind on autopilot, even under high levels of stress and fatigue. In these settings, you’re not developing a technical skill. You’re merely displaying one in order to develop other capacities, such as aerobic power or work capacity. The necessary physical skills are already there, on autopilot. You’re relying on them, not building them.

This brings up the question of how we get better at things.

How do we learn a complex movement so reliably that we can use it during intense training without breakdown?

Let’s look a little closer at the Yerkes-Dodson curve. 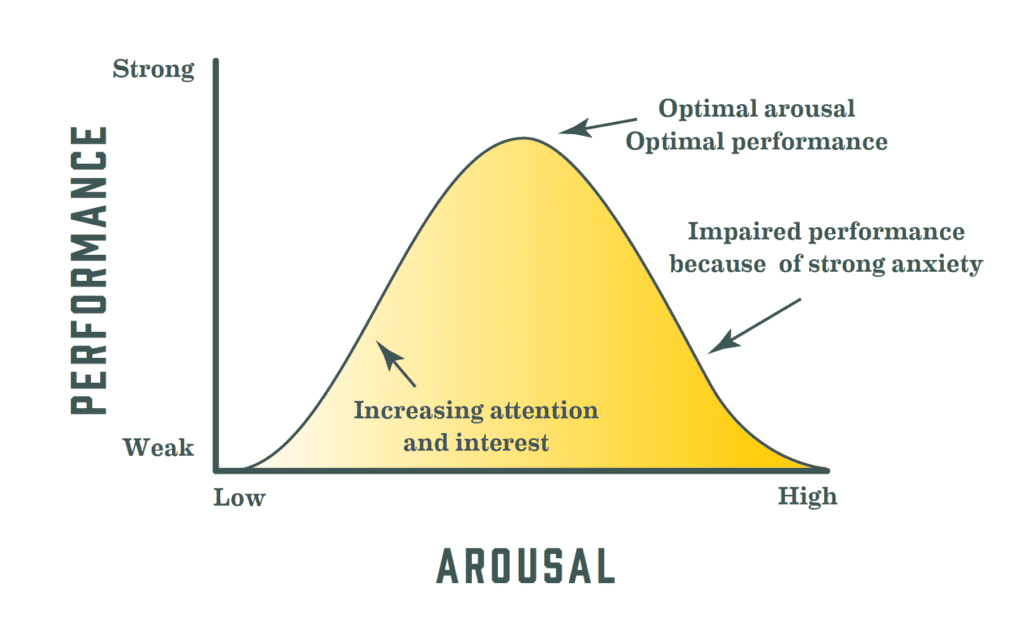 Too little stress and you’re too sluggish and unfocused to learn or perform.

Too much and you’re overwhelmed, can’t juggle all the pieces, make gross errors and crash.

Get it just right and you’re “in the zone.” You’re fully engaged, focused and working right at the edge of your ability.

For most gym workouts where you’re practicing a relatively complex movement in a challenging format that still allows you to think clearly and make small adjustments, the peak is somewhat broad and falls towards the top of your aerobic heart rate range, with some leeway in either direction.

For intense workouts with simple, well-practiced movements, the peak of the performance curve can be pushed pretty far to the edge of what your body can do.

If you’re cranking out a 60-second sprint on a spin bike or pushing a prowler across your parking lot, you don’t need much cognitive function. You can blow yourself up and still do the movement right. These workouts are where we often see mental and emotional factors take a larger role in performance. They allow you to explore some interesting parts of your mind because you can (relatively) safely push your body to its physiological limits. The limiting factors can change when you start to take your body into places where your mind doesn’t want to play.

This version of the Yerkes-Dodson curve takes that into account, by adding a second line that indicates how far into stress a simple skill can be taken without losing performance: 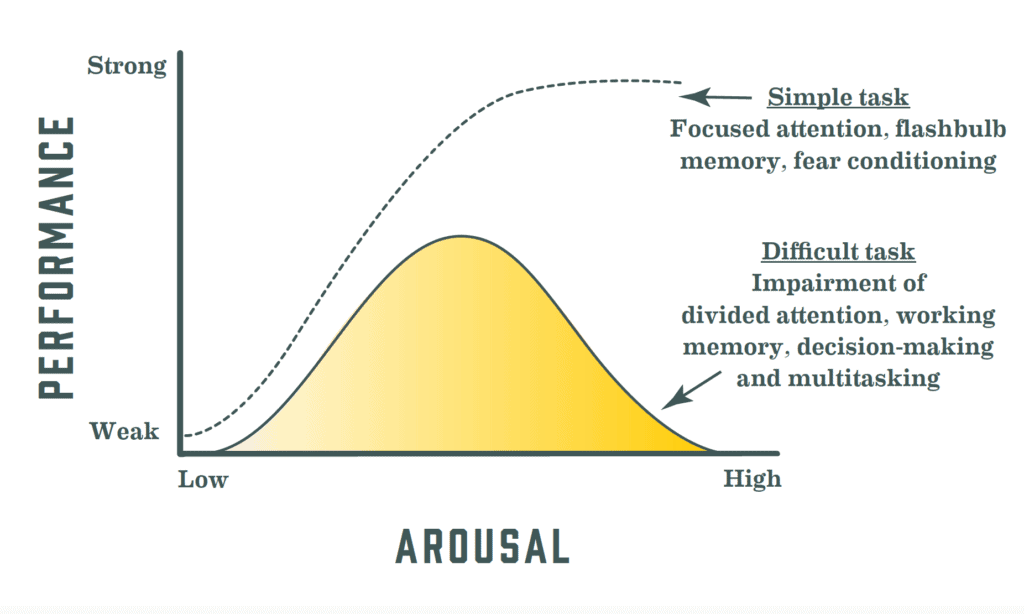 These are all, of course, simplifications. Every skill will have its own curve, and that curve can change a bit from day to day depending on everything else in the world that you’re bumping into as you go.

Which brings us to the important part of this, and the reason we bother to exercise in the first place: We can change stuff.

We know the power of adding the word yet to the end of a sentence:

“I can do a squat with good movement quality, but can’t hold onto that quality when I’m fatigued. Yet.”

This graph shows how a performance curve for a skill can be changed with good training: 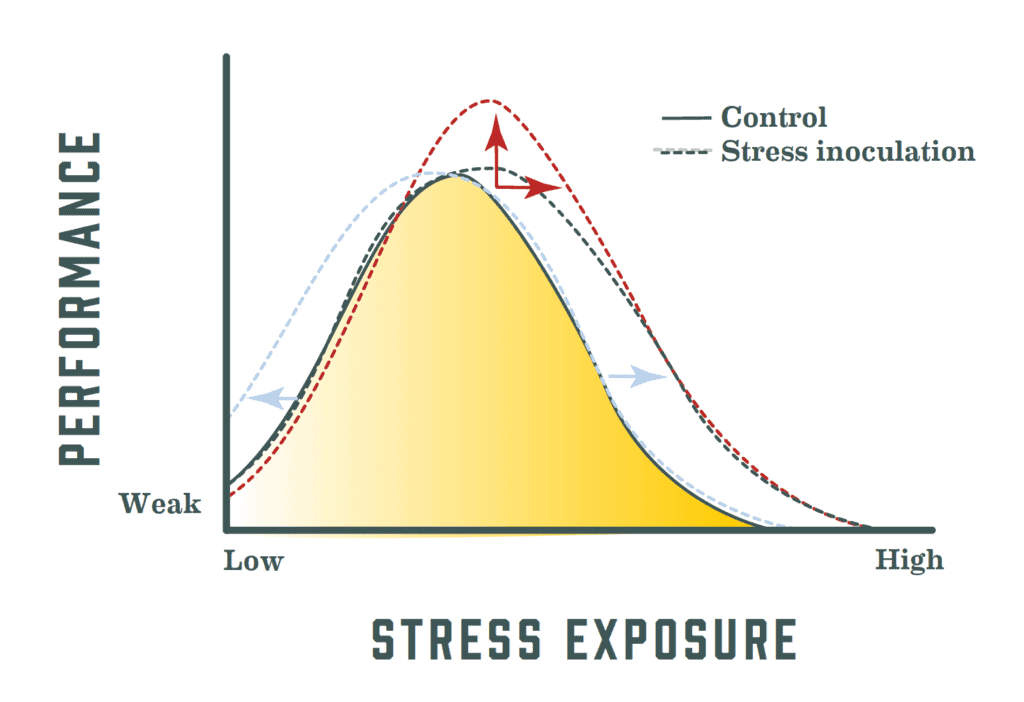 The fixed black line is the control. If you’re learning to do a goblet squat, this is you in the first month of training. There’s a clear peak of optimal arousal, and if you’re too sleepy or too stressed you fall off that peak in either direction and don’t perform as well. It’s your starting point.

Now, with training, a number of things can happen:

When you see an elite athlete (or an elite anything) performing, what you’re generally seeing is a combination of all of these things at work.

An Olympic medalist swimmer isn’t using some magical stroke that nobody else is aware of.

A world champion boxer is still throwing the same jabs, crosses and hooks that a first-year newbie learns.

They do these basic things extremely well and can hold that quality while pushing their bodies to the max of their physiological capacity or while exhausted.

Stress Inoculation Training, the process by which this happens, follows a 3-stage process:

This is where you get the mental models. It’s a cognitive stage where you learn the idea of what a skill is, and what “good” or “wrong” means.

This is the practice stage. You’re translating knowledge (the mental model) into behavior. It’s where knowing becomes doing. Here, you set the level of quality that you’ll have when your performance is automated and/or under high levels of stress and fatigue. If you remember our talk on “exploit and explore,” this is the exploration side.

This is where you’re largely changing your stress-performance curve. Through practice here you raise the level of skill you’re capable of at your best, you improve your ability to perform well at a lower level of stress (you can “do it in your sleep”) and you push the performance curve to the right so that you can hold quality under even higher levels of stress.

This is where you see where your practice has taken you. It’s full-speed, high-stress, real-life performance. Here, you’re not so much improving a skill as seeing how far you can push it.

This is how exercise progressions make you better at things

As you work your way through a good training program, you’re following this process.

At first, you’re watching videos (or a live coach) and learning at the thinky-brain level what a movement looks like.

Then, you’re consciously practicing it while comparing the behavior to the knowledge. You’re seeing how closely your practice repetitions compare to the mental model in your head of what they should look like and constantly refining based on that feedback. You’re expanding the stress-performance curve.

Finally, the skill is mastered at a high enough level that you don’t really need to think about it anymore.

At this point, you start to test it. Instead of doing fixed sets of a few reps at a time, maybe you try doing as many reps as you can with good form.

Or, you do as many sets as you can in a fixed amount of time.

Or, you do the same format of sets and reps, but with more weight or less rest.

Maybe you work on how much work you can do towards the left side of the stress curve and train with a eustress protocol.

As each skill is refined and stress inoculated, it paves the way for more complex skills that will follow the same progression.

In your first month of training, you might be practicing a basic goblet squat that feels like you’re learning algebra. Twelve months later you may be barbell back squatting a weight that you didn’t think possible for multiple sets of multiple reps, while still holding a strong movement pattern.

Keeping these concepts in mind as you design your training will help you get the most out of each workout, clearly delineate which movements best support a given goal, and build an ever-increasing repertoire of skills that can be reliably performed under challenging conditions.

1 thought on “Stress and Performance”