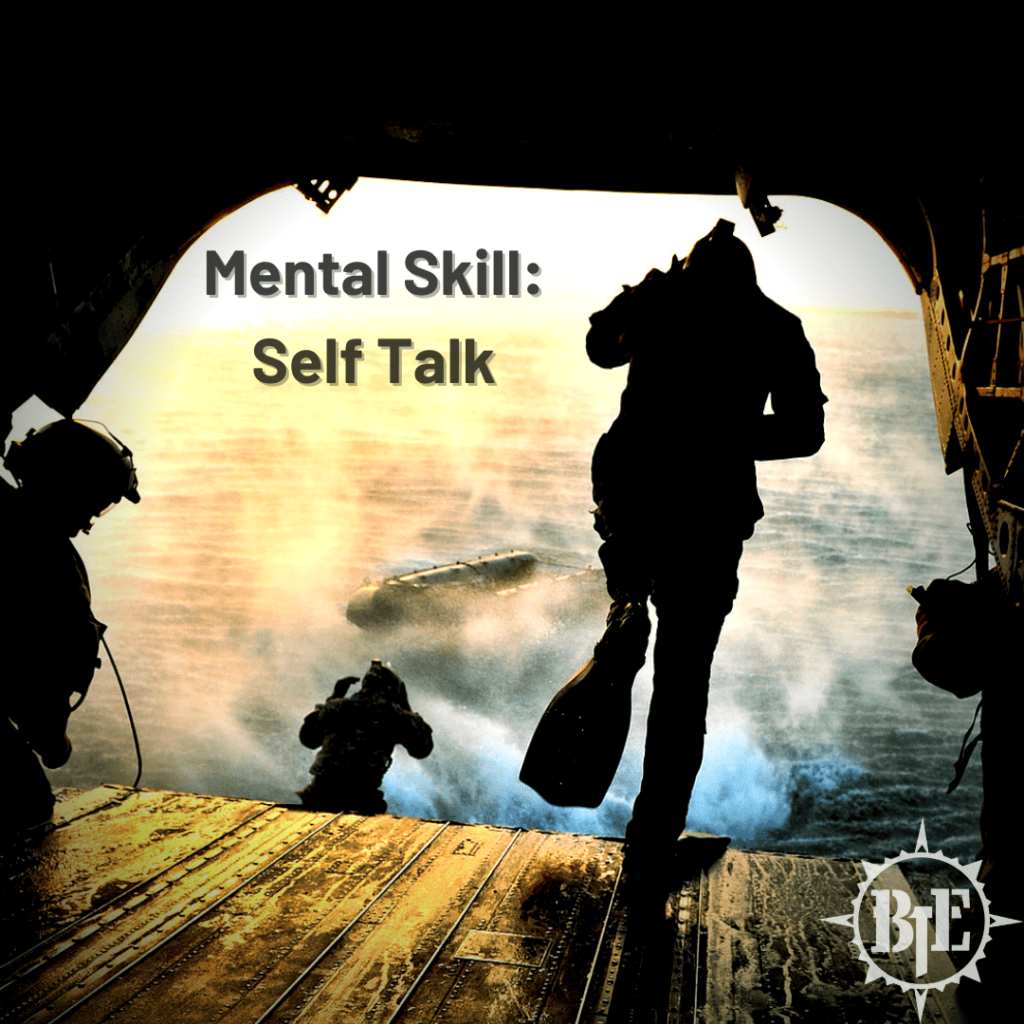 We’ve all got a running commentary in our heads throughout much of the day–scientists call it an “internal monologue”. During intensely challenging workouts or events in selection you’ll find out just how loud this voice can get, and it’s totally inescapable. It can be a force for good or an agent of your destruction. Learning to be aware of it and then to control it can be one of the most powerful tools you have on the mental side of training.

As I described previously, I joined the Navy and volunteered for SOF selection without knowing how to swim. I learned how to swim well enough to pass the screen test by failing my first two attempts and going to stroke development to kinda-sorta learn the technique before passing my final attempt by 7 seconds.

For the next 2.5 years or so, swimming was my personal hell. On some days I couldn’t physically pull myself out of the pool under my own power when the workout was over.

Early in this process, I realized that my newly developed loathing of all things chlorinated was eating into my mind during pool workouts.

As bad as the physical suffering was, I made it far worse with the constant negative chatter in my head.

Despite these forays into self-sabotage, I survived each pool workout, coming in dead last in every event and drawing the unwanted attention of the instructors. Back on land, with endless wonderful oxygen reinvigorating my brain, I took a look at my swimming performance and tried to fix what I could. My self-talk was an obvious hindrance.

Knowing that I couldn’t eliminate my internal monologue during prolonged workouts, I chose to replace it. I picked a handful of song lyrics that stuck in my head and gave me the right pacing for both running and swimming. Generally, just a single line of well-known songs, repeated over and over.

For whatever reason, the three songs that I used for this were Everything and Nothing by Mudvayne, Devil’s Dance Floor by Flogging Molly and, perhaps most oddly, Dreams be Dreams by Jack Johnson.

At first, it took some work to doggedly repeat those lyrics in my head and push the negative talk out, but over time it became a habit and felt natural.

I still hated swimming, but now I at least wasn’t making it worse for myself. Instead, I kept myself occupied with tiny bits of song lyrics that had the added benefit of helping me keep pace.

Like many of these exercises, managing your self-talk starts with awareness. Be aware that everything in your training is context-specific. You may be a happy camper during most workouts, but you could also find that certain environments or levels of training intensity bring out aspects of your mind that you never knew existed or don’t like to acknowledge.

Step 1: This is simple: don’t hide. Don’t hide from these glimpses of the dark pieces of your psyche. Look to recognize, understand and develop them so that they don’t take over in your most vulnerable moments.

During your training, proactively manage your self-talk by paying attention to and consciously deciding what your internal monologue will consist of from the beginning. In most cases, it’s best to keep it simple.

Step 2: Have a default string of song lyrics, or a mantra ready to go. When you’re not repeating a mantra or song, focus on immediate, objective feedback like “I need to adjust my stride” or “I should bend my arm more on the second pull and stretch out my glide.”

Consciously monitor your internal monologue and if you feel yourself straying from productive or at least neutral thought patterns, work to refocus yourself.

Step 3: Quantify this by timing yourself during a particularly challenging workout. Track how long you make it with good self-talk, and when you break down, mark that time. That’s your split. Continue tracking through the course of the workout. Over time you should find yourself going longer and longer without negative self-talk creeping into your mind, in the same way that through training you’ll be able to consistently run or swim a fixed distance in less time.

A question I ask a lot is ‘what were you telling yourself?’.

It’s especially helpful to ask that question when I see someone struggling. I’ve found that most clients tend to be much better at one of the continuum or the other when it comes to dealing with fatigue and pain. Some people can grind all day (suffer) while others can absolutely destroy themselves in an all out effort (hurting).

We have methods for dealing with both, but the stories and self-talk that people use must be unraveled first. They usually have some narrative about how they are “naturally” better at (insert whatever they are good at) and there is a specific reason why they aren’t good at the other thing.

So, they go into the event they aren’t good at expecting to do poorly and to have a good reason to do so. Unsurprisingly, they don’t get any better at it. As soon as we identify the story or internal dialogue they are using and rebuild or replace it with something more productive it opens up the ability to utilize specific strategies.

All the strategies in the world won’t improve performance if you’ve already convinced yourself you’re going to fail. Self-talk is often the limiting factor that must be cleared before further improvements can be made.

This applies well beyond physical training and SOF selection. In any difficult situation, the internal story we adopt will influence whether we respond to it as a challenge (“I know what this is and I’ve got what it takes to handle it no matter how bad it gets”) or a threat (“This is unpredictable, uncontrollable and may end in catastrophe”).

This is true whether you’re gutting out a 2-mile ocean swim, navigating a difficult relationship or trying to hold down two jobs while finishing a degree.

The leverage point here – the part that we control even in the middle of the event – is at the very beginning of the cascade: in our thoughts.