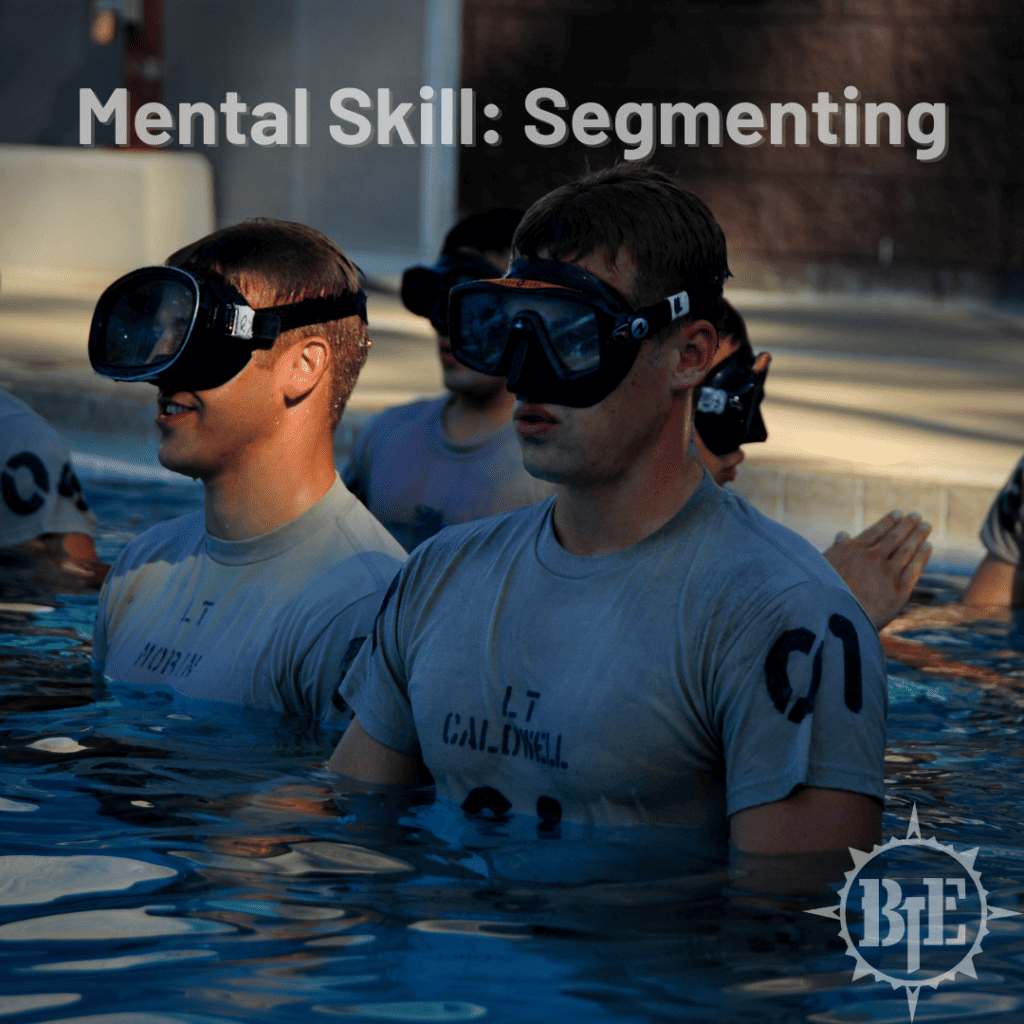 A little-appreciated fact about selection is that a surprising amount of the quitting happens on a Sunday night or Monday morning, not in the middle of training evolutions. That’s right, GI Jane was a lie.

It’s not the immediate prospect of doing push-ups for another hour that really messes with your head, it’s reflecting in a calm moment on how much life is going to suck for the next six months. It’s easy to become more worried about what lies in the shadows of our imagination than by what we can see right in front of us.

But, the opposite is also true – you can change your perceived stress by altering how you think about it. One of the most effective and common strategies for this is known as segmenting. Segmenting is exactly what it sounds like, the process of breaking an event down into smaller and more manageable pieces.

Most of the time, it’s totally unproductive to think ahead in your course by more than a day or two. Even thinking about what will happen in the next week can bring an unnecessary and unproductive level of preoccupying dread. The most successful candidates are the ones who focus purely on the task in front of them. They do not get distracted, they do not ruminate. Then, when the task is finished, they can “change channels” or “switch targets” and immediately move on.

One of the best ways to do this is by breaking your day down into meals. Forget about the rest of the week or even the rest of the day. Instead, make it to breakfast. Once you’ve done that, your only goal is making it to lunch. Then, dinner.

One of the most useful mantras we had as students at the Naval Special Warfare Center was “the worst part of the day is getting out of bed.”

We’d gather together for roll call in the pre-dawn darkness outside of the barracks, and it was a common form of greeting.

“Morning. How you doing?”

*Shrug* “Well, the worst part of the day is over.”

This was an even narrower form of segmenting than breaking the day down into meals. The worst part of any voluntary ordeal is often the first part, and many times you’d have some form of momentum to carry you through the day once you could muster the willpower to get yourself out of bed and face the storm.

We would segment our mental energy down to that small moment, acknowledging and fully focusing on the magnitude of that task: Getting out of bed. That was our first and most important small victory of the day.

When things get especially challenging, the next meal might be too far away to seem meaningful. Lunchtime may as well be a Hollywood gala on a yacht that you’ll never see.

In those moments, break things down even further.

Don’t even think to the end of the swim, run, ruck or beatdown session that you’re in. Narrow your focus down to the next small chunk of time, and drop everything else from your mind. Getting through the next 4 miles of soft sand running might be too much, but you can make it to the next little pile of rocks. You can take 5 more steps. You can always swim one more stroke. You can always do one more pushup.

That’s all you will ever need.

In your pre-selection training, you can practice this by mentally breaking workouts or other challenging portions of your day down into smaller pieces. Don’t do a 50-rep deadlift workout. Pick a weight that’s on the edge of your ability–heavy, but manageable with good, fast form. Deadlift it. Reset. Then do it again. 50 times.

This concept applies to far more than selection courses. Living in the distant future is not just a way to camp out in your own nightmares. It’s also an easy form of escape. We can sit idly and imagine what success will look like once we finally start this business, finish this degree, or put in the decade or more of training necessary to attain a black belt in Brazilian Jiu-Jitsu.

That fantasy becomes mental opium. It allows us to shortcut all the work–the early mornings, late nights, daily sacrifices and monotonous grinding–and have a quick taste of the end result. As Ryan Holiday put it, one of the biggest obstacles to success is the idea of success.

In SOF we knew them as the I-was-gonna’s.

“I was gonna try out for SFAS/Pararescue/Recon/Whatever but….”

These guys wanted the end result. They spent time dreaming of what it would be like if they made the commitment and did the work. But they never shifted their focus away from the abstract, distant future and back to the hard reality of what to do with the minutes and hours of the present day that would move them incrementally closer to what they wanted. Unlike every person who enters selection – whether they succeed or fail – they spend their lives with an unanswered question.

“I was gonna start a business, but the paperwork alone is a nightmare.”

“I was gonna go to school for that, but there’s no way I’m going to deal with four years of that shit.”

“I was gonna budget for that, but I can’t possibly set aside 500k for retirement so I’m not going to save anything.”

Whether it’s paralyzing yourself with the compounded difficulty of a months or years-long process, or slaking your desire for the achievement of a difficult goal by mentally skipping to the fun part at the end, you’re distracting yourself from what matters: Doing the fucking work. Right now.

If you effectively segment the task, no matter how daunting the total process, you’ll be able to break it down into small enough pieces that every step is doable. One day you’ll finally look up and realize that you’re standing at the end of innumerable small steps forward.