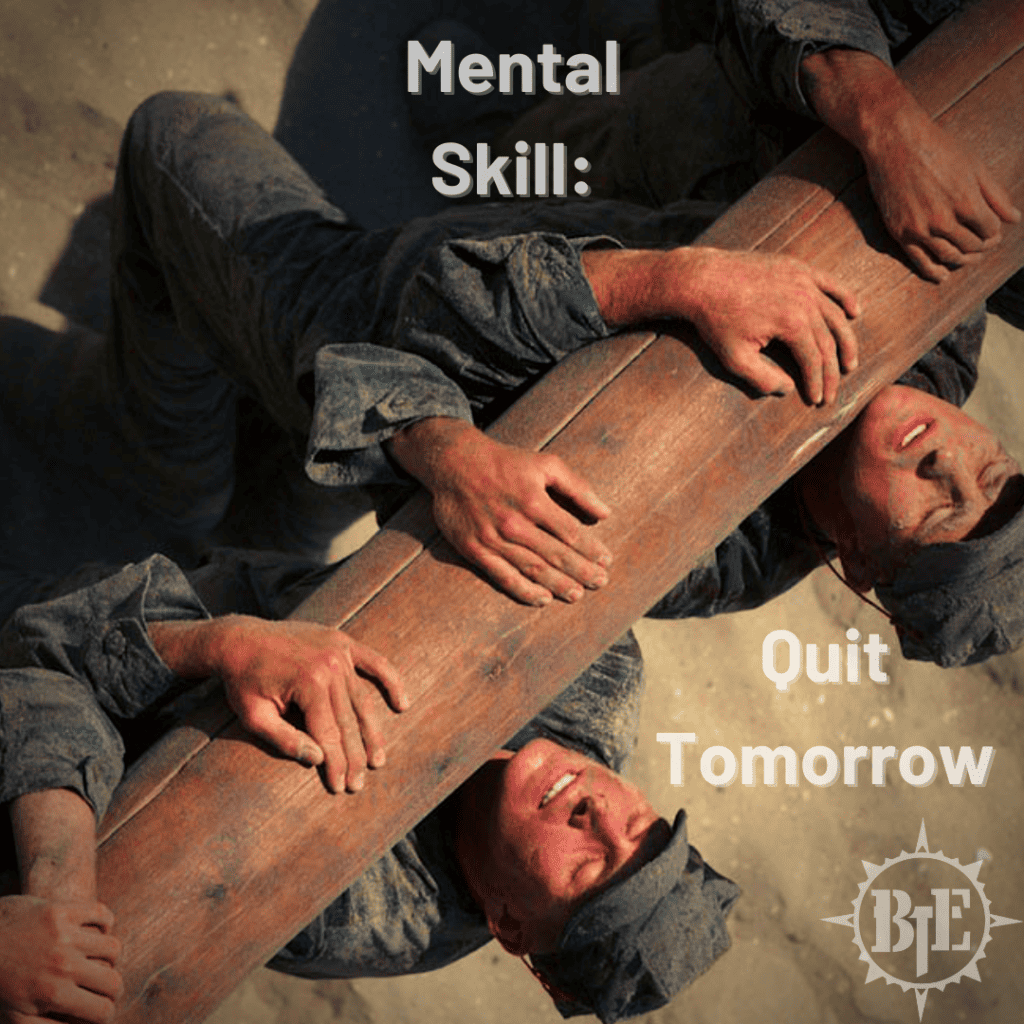 “Such as are your habitual thoughts, such also will be the character of your mind; for the soul is dyed by the thoughts.” – Marcus Aurelius

Most people have heard sayings like “You are the sum of the five people you spend the most time with.” This is one of the advantages of belonging to a SOF community. When everyone around you is driven, disciplined and holds themselves to a high standard, you rapidly start to think it’s normal. You adapt to it, you internalize it. We always swim faster with the current. This tendency to bias our behavior to be more like those around us is known in behavioral research as herding.

A variety of this, known as self-herding, is when you refer to your own past actions for subconscious guidance rather than mirroring what others around you are doing. The interesting thing about herding is that a behavior or decision bias can persist a lot longer than the situation that produced the behavior.

For example, let’s say that you’re at a restaurant with a group of friends. You’re all members of the same MMA gym and are training for a tournament in two weeks. You’ve just finished a workout together and are all feeling great about your training. You skim the menu and see plenty of appealing but unhealthy options, but due to the social context and your I’ve-got-my-shit-together mood, you order something healthy. Protein, veggies, healthy carbs.

A few months later, you stop in at the same restaurant by yourself in the middle of a busy workday. As you scan the menu, you subconsciously refer back to the decision you made the last time you were here, so you repeat the same healthy order. Over time, this becomes a habit. Every time you’re in this restaurant you save time and mental energy by defaulting to what you did before.

This tendency for one-time passing emotions to influence long-term decision-making is known as an emotional cascade. You could think of it in the context of sensitivity to initial conditions, covered in-depth in the chaos and complexity section of our book. Small factors in the beginning of a process can reverberate through time into bigger things.

One of the most effective ways to take advantage of this effect is with the common practice of successful SOF candidates, to “quit tomorrow.” In selection, it’s incredibly tempting to tell yourself that the run is too far, the water is too cold, or you just can’t do another pushup.

Some days in selection, we wanted nothing more than to make it stop. One of the ways we coped with this was to promise ourselves and each other that we would never quit in the middle of an evolution. If we did quit, it would be at the end of the day once it was all over and the intensity of the moment had passed.

Say it was beatdown time. We’d be on the beach, with a big sand berm above us and the frigid ocean right behind us. We’d be going through an endless series of pushups, burpees, eight counts and flutter kicks.

The instructor’s face-to-face torment and running commentary on our personal weaknesses – ranging from a pathological inability to do a correct pushup to what a great disappointment we must be to our parents – would only be interrupted by sprints into the surf zone and up to the top of the sand berm for a fresh coat of wet and sandy.

Doing 100 burpees in a row is an extra special experience when your clothes are sopping wet and sand is rubbing your skin away with every movement.

Sometimes we’d have this conversation among one another, in a spare moment away from the earshot of the instructors. We’d encourage each other with the reminder that we could always quit tomorrow. Other times, it was just a conversation you had in your own head. No matter how bad it was, it could all be over tomorrow. Just keep going for now.

It wasn’t planned at the time, it just happened. But it helped.

Most guys would look back on the evolution that made them want to quit, realize that it wasn’t really that bad, and be damn glad that they had waited before making a permanent decision.

Each time we decided to “quit tomorrow” we were cementing an action of pushing through pain to keep going in moments of vulnerability. Each morning, we’d wake up and realize that even though yesterday sucked, it was within our power to handle it and keep going. Fuck it, we survived yesterday. And we were one step closer to finishing the course and confidently facing each new challenge with the same fuck it, we’ll get it done attitude, no matter what the day held.

You can use this effect to your advantage in many different settings. If you’re in the middle of a horrible set of high rep squats, you’re going to want to come up with any reason to stop early. Don’t. You can quit the entire workout once that set is over, but finish that one set. Once it’s over, you’ll probably find that you have it in you to finish another. And then another.

With conscious control, you can affect your actions today and establish the habits which you’ll rely on in the future.

This practice becomes especially important in times of tumult, whether that means that your new normal is the day-to-day grind of a SOF selection course or the current societal upheaval that we’re all facing in the coronavirus pandemic.

When we’re under chronic stress and navigating unfamiliar territory, our cognitive function changes. We have reduced access to the executive parts of our brain that run long-term goal-oriented decision-making. Instead, we’re more likely to revert to more primitive and reactive parts of our brain and solve problems reflexively with only a short-term focus.

If we let this run uncontrolled, we end up with a lot of solutions that create future problems.

We solve the problem of cold water and sandy burpees by quitting the course. After a warm shower and some time to think it over, the weight of sidetracking our career will seem a lot more pressing than another afternoon of burpees.

We solve the problem of a crashing economy, social isolation and a looming threat to the lives of our elderly loved ones by tuning out, binge-watching The Office and filling our freezer with ice cream. We kinda-sorta feel better (or at least, feel less) for a while, but when it’s over we’re still facing the same world of uncertainty and challenges, just with a little more blood sugar and a few days less time.

If we can remain aware of how this contextual stress will affect our decision-making, we can maintain enough control to use strategies like quitting tomorrow and forge new reflexive behaviors that support our long-term goals in this new environment.

Moment by moment, day by day, we can bias our responses toward doing the right thing even when the right thing is hard. Eventually, that bias solidifies into the habits we fall back on in our lowest moments. Quitting tomorrow, a temporary override, leads to a new baseline: a mind that never feels the urge to quit.