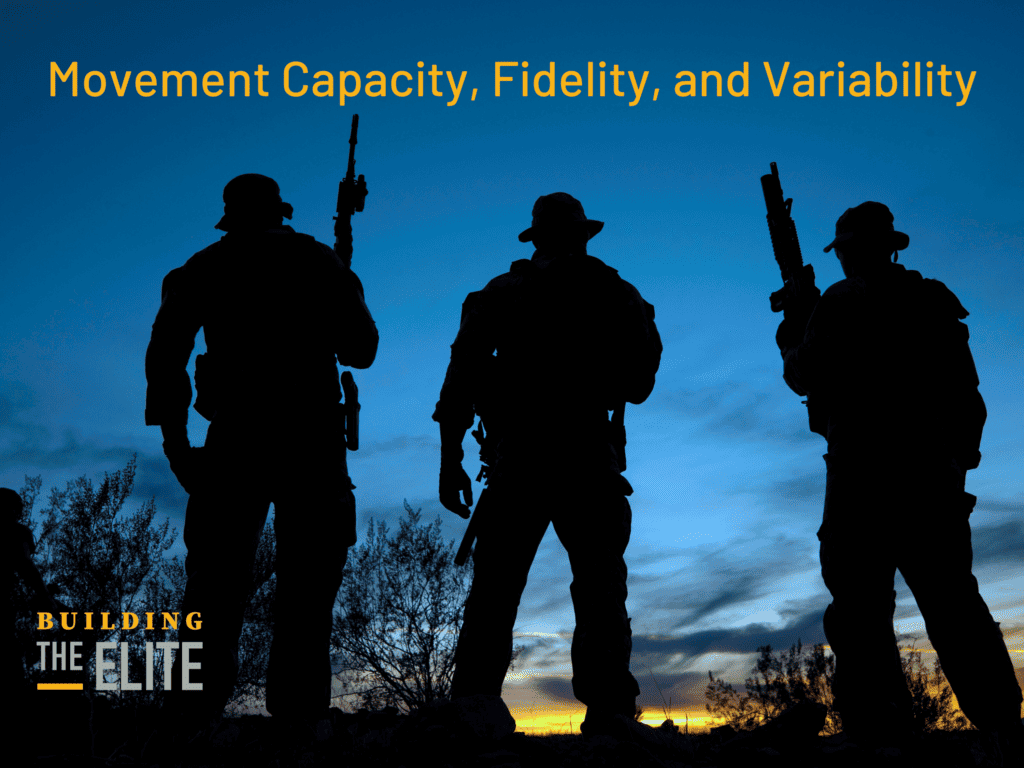 Progressively adding stress to a high-quality pattern is a key part of training. But, if we step back to the bigger picture of what we’re trying to accomplish, and what we want an athlete’s body to do reliably, efficiently, and under a wide range of challenging and unpredictable conditions, there’s more to consider.

We’ve been training people for special operations selection since 2010. These are courses like the US Army’s Special Forces Assessment and Selection, US Navy BUD/S and the British Army’s SAS selection. We’ve trained candidates for courses in every branch of the US military as well as around half a dozen other countries, with a success rate over 90%.

Part of the process for training people to succeed in places where as many as nine out of ten candidates will fail is by looking more deeply at movement than how much weight you can move and how many reps you’re doing.

These are some of the other important pieces of the movement puzzle:

The expert has mastered movement variability. They can handle deviations in their environment because they can reflexively adapt without negatively impacting the outcome. They can be successful even when lots of things go wrong.

Think of a skilled athlete moving through rough terrain with a ruck, making slight adjustments at each step depending on the slope and surface quality of the ground and the presence of obstacles along the way. Compare this to a non-athlete trying to accomplish the same task, rigid and mechanical, tensing up like a scared cat with each unexpected step and moving in a stop-and-go series of small falls and catches.

The beginner is in the inverse position as the expert: they have variable outcomes, with fixed motion and limited variability. They’re vulnerable not just to rugged terrain, but to external stressors and fatigue. They’re only successful when everything goes just right.

The body has many ways of accomplishing a task. There isn’t one single arm flexor, hip extensor, or neck rotator – multiple muscles can and will do each job depending on the movement problem the brain is trying to solve. We call this optionality redundancy.

A capable body can possess wide degrees of freedom and thus a lot of redundant options. Note the use of the word capable – the amount of redundancy available to you is dependent on your specific movement capacity.

Expert athletes don’t have a narrow range of motion or a more fixed pattern of movement when executing a task. In fact, they have a greater variability in their execution of a movement from trial to trial, with less variability in outcome.

Think of an expert on a basketball court who can hit a shot from a bizarre, off-balance position compared to an amateur who has to stand rigidly in one position and still misses most of his shots while moving less fluidly.

Experts are able to use a greater range of variability in their execution yet are far more consistent in their outcomes.

This is called the principle of abundance. The body can use a variety of muscles in different combinations to execute the same basic movement with the same outcome.

Movement is the ability to display your physical potential.

Movement capacity is the total available motion available to you at any time.

You need enough movement capacity to express your raw physiological capabilities and psychological skills. This is where many people struggle in selection courses. They have the raw fitness to pass selection but don’t have enough movement variability to deal with the extreme workloads that are imposed.

Variety does not equal variability

It’s easy to assume that traditional gym training has a lot of different movements – you lunge, squat, deadlift, clean, press, row, run, walk, ruck, crawl, etc. It’s true that any good program designed for developing a special operator will include these, but doing a variety of tasks does not mean you’re using different strategies to execute them.

For example, if you use your lower back, hip flexors, pecs and lats to create stability during all of these exercises, you’re reinforcing the same attractor states and stressing the same tissues and joints in largely the same way.

You need the ability to fluidly shift movement patterns to distribute stress evenly across your body, compensate for fatigue, maintain tissue and joint health and execute a wide range of tasks.

So why aren’t all special operators yoga masters capable of doing the splits in every direction? Because everything comes at a cost. Extremely mobile people give up passive stability and strength potential for the ability to move through extreme ranges of motion.

The more movement a joint is capable of, the more movement potential the brain must control. More importantly, most range of motion limitations aren’t joint or tissue-related but are motor control issues. So, a hyper-mobile person has taught their brain to relax muscle groups allowing for extreme ranges of motion. This can be a problem in situations that require high force output or when extreme fatigue sets in and joint integrity is compromised due to a breakdown in motor control.

Think: “Both, better” not “Either/Or”

It’s a common misconception that you need to be ‘stiff’ or inflexible to be strong. That may be true at extreme force outputs; for example, a world-class powerlifter or strongman likely wants less movement capacity to help provide enough stability to move extreme loads. However, outside of those margins, variability (movement capacity) does not necessarily lead to a loss of stability in the execution of a skill.

A special operator needs to be strong, but not strong relative to the limits of human potential. A deadlift at about 2 to 2.5X bodyweight is sufficient. This level of strength can be accomplished additively, as a net gain in physical ability. It does not require trading one thing for another.

For instance, if you’re 200lb and have a 400-pound deadlift, you’re not strong enough to allow for a breakdown in movement capacity (or aerobic capacity, for that matter). Currently, the world record deadlift at 198lbs is 881. A 400-pound deadlift is equivalent to running a 7-minute mile: it’s not world-class, it’s simply good enough for most things.

Movement fidelity is the ability to maintain movement quality and performance outcomes despite influence from external stressors (rough terrain, a heavy ruck or angry selection cadre with bullhorns) and internal stressors (pain, fatigue and uncertainty).

This concept combines the ideas of synergy and stability from motor learning research.

Stability: The ability to maintain the current trajectory or desired movement (static, dynamic or postural) despite external perturbations.

Synergy: A group of variables that change synchronously that ensure the stability of performance variables. Simply put, movement adjusts on the fly to maintain outcomes.

Think of this sort of like the traction control on your car that’s constantly varying which wheels get power to keep you on the road. Your body needs a lot of options in order to constantly adapt to changing conditions and keep you doing the work that needs to be done.

Movement Variability and Fidelity are not the same things

For example, say you’re doing a team log carry. You need the requisite variability to pick up the log, press it and walk with it through uneven sand while maintaining adequate posture and technique so as to not injure yourself.

If you don’t have the requisite movement fidelity you may initially be able to do this, but you’ll break down and fall into injurious movement patterns if you’re required to repeat the task multiple times. You’ll hyperextend your lower back, put your shoulders in weird positions or maybe develop a gait compensation that endangers your knees.

If movement breaks down under stress or fatigue, the risk of injury and performance lapses multiply almost exponentially. However, if you become too rigid in your solutions to problems, you’ll lack the variability necessary to adapt fluidly to dynamic environments.

Movement fidelity in running, swimming, rucking, or other physical tasks must be trained in the same fashion as any other operational activity. Stability in execution must be maintained with enough flexibility to allow for constant exploration of new strategies and consistent learning.

The concepts above provide a few additional mental models that you can incorporate into your training. Think of them as different lenses to look through while planning your (or your client’s) workouts.

Here are some things to consider while applying them:

When you’re thinking about movement fidelity, look at how much your movement at the most difficult portion of a workout resembles the way it looked at the beginning. You’re looking for the ability to resist technical breakdown.

If you’re doing weighted carries, can you maintain a smooth gait pattern, keep your lower back out of extension, breathe with even expansion through your thorax and keep your chest from collapsing?

Consider ways to add movement variability to your training.

First, can you evenly distribute tension throughout your body, and comfortably and reflexively hold a neutral position at your pelvis, spine and ribcage?

From that neutral position, can you move with equal ease in the transverse, frontal and sagittal planes? Does flexion come as easily as extension? Is your training volume balanced in these patterns? Remember Wolff’s and Davis’ Laws. Tissues adapt to the specific demands imposed upon them. Distributing these demands evenly is important for resilience.

It’s easy to fall into a comfortable routine with exercise selection, but it can be really helpful to include more variety in how we load movement patterns. Straight barbells are great for maximal strength, but there are plenty of training protocols that could be done as goblet squats, with a kettlebell racked on one or both sides, or with a different bar like a safety squat or cambered bar.

How many forms of movement do you incorporate into your conditioning work? Try not to get locked into a single implement like a rower, stationary bike or treadmill.

Do you add variability from the external environment into your training? For example, if you’re running, how many miles are you doing on a natural trail vs. a sidewalk or track?

Are you working with unstable implements in the gym like crazy bells, slosh pipes or sandbags? When you use them, are you able to control them without locking into the same pattern (looking at you, lumbar extension) every time?

Movement means a lot more than going into the gym and doing stuff that makes you tired, or how good your barbell back squat looks. If you’re an athlete concerned about long-term performance and resilience, concepts like movement variability, capacity and fidelity should be factored into your training in the same way that you think about things like maximal strength or aerobic capacity.