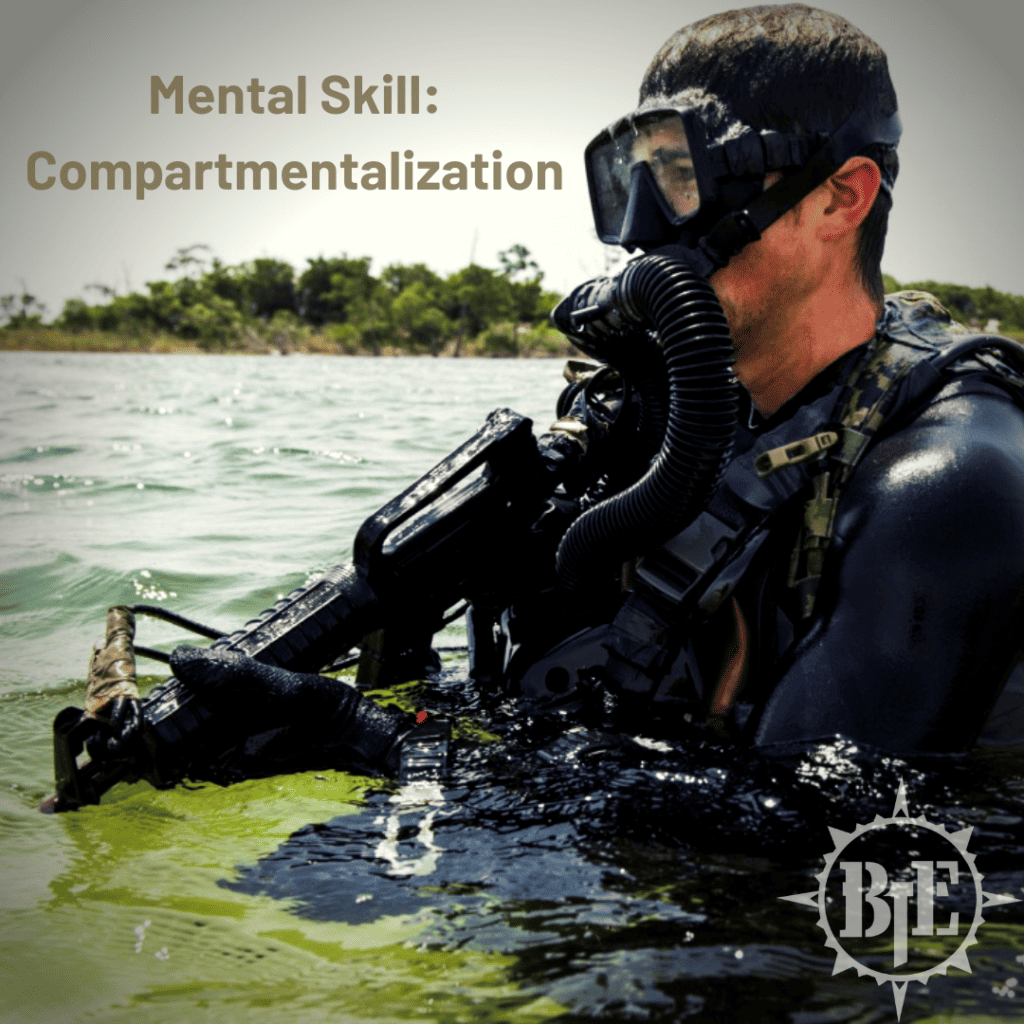 Compartmentalization is the practice of mentally setting things aside that are unnecessary or counterproductive to your immediate purpose.

Think of a soldier who has to drag a buddy out of a firefight despite his own shrapnel wounds.

Think of an executive coming home and putting a $300 million merger out of their mind in order to spend time with their family.

Think of an Olympic sprinter rounding out the last turn of a 400-meter dash, and pushing harder despite pain, fatigue, and the fact that the success of their career (and the return on the last two years of training) depends on a few hundred milliseconds.

Effective compartmentalization doesn’t mean coping with problems by ignoring them. It means that you have an understanding of what matters most right now and what can either work itself out or be dealt with later.

As a Brownshirt, one of our jobs was to assist the instructors during Hell Week. We’d set up various training evolutions or medical check stations, and whenever possible sneak extra food or shots of Gatorade to the students.

Around Wednesday, the students get their first nap, inside a series of large green tents staked on the beach. Two of us were tasked with hanging out on the beach and keeping an eye on them. We were looking out for any medical issues that might crop up and mostly spent our time getting the students to walk the 50 yards to the bathroom instead of peeing in the sand that we’d all be doing pushups in the next day.

One of these students shuffled toward me in his saltwater-soaked cammies. His fists were clenched at his sides, his body tensed as if he was trying to draw deeper inside himself or at least walk without having to touch cold, wet cotton.

He paused in front of me, staring off at the horizon. His body relaxed for an instant and then he suddenly convulsed in a full-body shiver.

Still in a thousand-yard stare, he paused in a moment of thought and declared, “Fuck I’m cold.”

With that, he resumed his determined, hypothermic trudge to the bathroom.

That was it. He didn’t dwell on his suffering. He simply paused for a moment to acknowledge and accept it, and then set it aside in order to continue on his mission: to pee as quickly as possible so he could get back to his cot.

I saw that student months later after I’d classed back up into SWCC. He had graduated BUD/S with class 248 and was in CQT.

There is a distinction between pain and suffering.

You can suffer without being in pain, and you can be in pain without suffering. Learning to separate the two is an important part of what training is. That BUD/S student was borderline hypothermic (and trust me, hypothermia hurts) but he wasn’t suffering. He didn’t dwell on his discomfort. He compartmentalized it.

Again, this does not mean passive avoidance. As the psychologist Steven Hayes said, “if you cannot open up to discomfort without suppression, it becomes impossible to face difficult problems in a healthy way.”

One way to acknowledge and accept your passing thoughts and feelings without conflating them with your identity is to mentally add the words “I am feeling” to your self-talk. Instead of saying “I am cold,” say “I am feeling cold.”

This helps to create some distance between the feeling and who you are as a person and what you need to do in the moment.

The goal is to think of feelings and impulses (“Fuck, I really need to not get back in this cold water.”) as passing weather–just clouds drifting by. You notice them come and go, but the earth underneath them remains unchanged. You may feel transiently miserable, cold, exhausted, whatever; but that doesn’t mean that you have to stray from your course.

There are countless areas of our lives where we add our own imaginary catastrophes to our real discomfort and make it actively worse. Anything from the resistance you may feel when getting out of bed early for a morning workout, to the discomfort of holding a fast pace in a sprint interval, to the mental inertia that many of us have when grinding through to-do lists at work.

Learning to effectively harness the skill of compartmentalization starts with self-awareness and an honest understanding of what’s happening in your body and mind. From there, assess for what matters and set aside the things that don’t so that you can focus on your real objective.